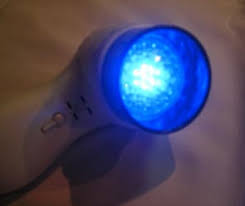 Before getting into what blue light therapy is, it is important to understand the basics of light therapy itself in the medical field. Also known as phototherapy, light therapy is the medical use of exposure to daylight or specific wavelengths of different types of controlled light such as lasers, light-emitting diodes, fluorescent lamps, dichroic lamps or full spectrum light. Light treatments are controlled in how much light is given off, the intervals at which the patients receives the light treatment and even at what time of day is best to receive it. Common disorders treated include skin disorders, sleep disorders and even certain psychiatric disorders. The light therapy specifically targeted at the skin is used to treat acne, eczema and neonatal jaundice. There is also light therapy designed for treating different depression disorders.

Blue light therapy is the use of a blue light to kill acne bacteria that is on or located under the skin, as opposed to using a topical or oral acne medication. Throughout the treatment, the skin is exposed to a dark blue light for a short period ranging from a couple of seconds to about fifteen minutes which is at the discretion of the product you are using. At home treatments are recommended to be used daily until the acne has cleared up or has been brought under control. Afterwards, you can reduce the treatment to two to three times a week. While blue light treatment is an effective acne treatment, it is not a full blown cure so it is important to stay consistent with your treatments to make sure that the acne is kept under control.

There are plenty of advantages to using blue light therapy as opposed to using other types of treatments. It is a one hundred percent natural process and is non-invasive towards your skin. There is no use of medication and there are no foreseen side effects for the long term or in the short term. It is safe to be used for all ages and can be used daily; in fact, it is recommended that you do. It is virtually painless and can be self-administered inside your own home. Over time, it gets better at treating your acne and it will still work even on certain cases of antibiotic resistant strains of acne causing bacteria.

Some of you may ask, how exactly does blue light therapy actually work? Well, here is a scientific explanation from the AAD or American Academy of Dermatology.

“[Blue] Light gets at the core of what causes acne eruptions: P. acnes, the bacterial responsible for causing acne inflammation, pumps out tiny molecules called porphyrins. When those porphyrin are exposed to certain wavelengths of light, they produce free radicals that kill the bacteria. Without P. acnes around to cause inflammation, acne clears up.” American Academy of Dermatology 2002

What all this basically means is that, blue light attacks the acne bacteria cells and starts a chemical reaction that causes the bacteria to self-destruct while doing no harm to any other cells on or in the skin.

We have all gone through that phase in our childhood where we would breakout and we wouldn’t want to show our faces outside of our room and would fight with our parents about going to school, because come on, it was life or death in high school about the way you looked. For some, it just goes away after a short time. For others, it takes some work and for the rest, it just never seems to go away no matter what we use or what the doctors prescribe us. Instead of going through every “miracle product” on the market, it may be beneficial to try using blue light therapy.

All the benefits described beforehand about blue light therapy go almost double for teenagers and children. Blue light therapy has been clinically and scientifically proven to treat all cases of acne from mild to severe. In fact, studies show that eighty six percent of people who used blue light therapy saw at least some degree of the clearing of acne within twelve weeks, and that is with continued and consistent use. It has also been found that blue light treatment works the fastest of teenagers and preteens. This may be due to the fact that their body’s cells reproduce at a still effective enough rate to help combat acne. On a quick note, there is also a similar treatment called red light therapy. It seems to work just as effectively well as blue light therapy does. Blue light treatment is also a good starting defense against severe cases of inflammatory or cystic acne. The blue light actually helps by giving your skin some of the Vitamin D that your skin may have a deficiency of .

There are a few factors that everyone should consider before going out and buying a blue light therapy device. The first thing to consider is the treatment time. If you have plenty of time to spare, then it may not matter how long it takes to use. Some require five minutes while some others will require a minimum of twenty minutes. The treatment time depends on the size of the treatment area and the number of the LED’s that the device uses. The second thing to consider is the treatment area. If you have only a small area of acne, you wouldn’t want to go out and buy the biggest device out there. However, the bigger the treatment area, the less time it would take to treat all the acne areas on your skin. The third thing to consider is the warranty on the device. Since blue light therapy is an ongoing process, it makes sense to try and find a device with the longest warranty. The last two things to consider are quite simple, and they are FDA approval and the price. If a product is FDA (Food and Drug Administration) approved, then that means it has been deemed safe for commercial use. If not, then you may want to steer clear just to be on the safe side. And price is just how much you want to spend of course. The devices price ranges from eighty to four hundred dollars on average.

There are three blue light therapy products that are the most highly recommended when it comes to treating cases of acne.

The first is the Baby Quasar Photorejuvenation Light Therapy, Blue. The price may be a little steep for some, priced at about two hundred and sixty dollars but it comes with high reviews. It is FDA approved with a one year warranty attached. It uses twenty-four, three millimeter LED bulbs and according to the directions, the whole process takes about twelve minutes all together. It instructs you to divide your face into six different sections and to move the device over every section for two minutes. This is to make sure that every part of your face gets an even dosage of the therapy treatment. The product itself is about one pound so holding it up to your face for twelve minutes shouldn’t be too much of a hassle.

The second recommended product is the LightStim Acne Light. This one’s price is a little up there as well at about two hundred and eighty dollars. This one is different from the Quasar Blue because it also uses a red light in conjunction with the blue light. While the blue light is designed for literally obliterating all the acne causing bacteria, the red light accompanies it by helping the skin by promoting healing and rejuvenation. Its use is the same principle as the Quasar but has you placing it on the areas of your skin for five minutes at a time instead of two. This is probably because of the added bonus of the blue light. And if you’re not satisfied with any of the results, they do offer a ninety-day money back guarantee.

The third recommended product is Omnilux Clear-U. As with the LightStim, it uses both red and blue light to kill the bacteria and heal the skin. As well, the price is up in the mid two hundreds and its reviews seemed to be mixed but still leaning towards the positive side. There is not much more to say on it as it has the same basic instructions and descriptions.

So all in all, these are just a few of the products that can help you treat your mild or severe cases of acne without having to go to the doctors or dermatologists office and spending all that extra money just for the them to give you the same information you can find anywhere on the internet. For some of these products, the price may be a little steep but with all the good it can do, it pays for itself in the long run.